In writing this blog, I am blessed with learning all sorts of derogatory terms for people. First Bogan and now Pommy, which is an "alternative" name for a British person.

The term pommy, pom or pomme, in Australia, New Zealand and South Africa, commonly denotes a person of British heritage or origin—or just English: it is used regardless of distinctions between the four UK nations. A derogatory term, it was controversially ruled no longer offensive in 2006 by the Australian Advertising Standards Board and in 2010 by the New Zealand Broadcasting Standards Authority.[2] Despite these changing views, many British people or those of British origin consider the expression offensive or racist when used by people not of British origin to describe English or British people, yet acceptable when used within that community: for example, the community group British People Against Racial Discrimination was among those who complained to the Advertising Standards Board about five advertisements poking fun at "Poms", prompting the 2006 decision.

The user interface gives you a paragraph count (1-9) which is uniquely done using a standard anchor tag vs a select input tag. For those that are counting, that's 2 less than 11 which is what I like my ipsum generators to go to. The user also gets a paragraph tag wrapper option in the form of a checkbox. Changes to parameters cause an immediate AJAX refresh of the placeholder text.

As of this writing, Pommy Ipsum is in beta mode. If you don't believe me, look in the upper right corner of your 128" retina computer monitor and you'll see the "beta" ribbon image. They might as well have just put in an animated construction gif. Seriously, I don't think an ipsum generator needs an advertised beta or alpha.

Pet Peeve: Checkboxes that don't have corresponding labels!!! The "with <p> tags" should be a label so I can click it vs navigating my mouse cursor to the little checkbox. 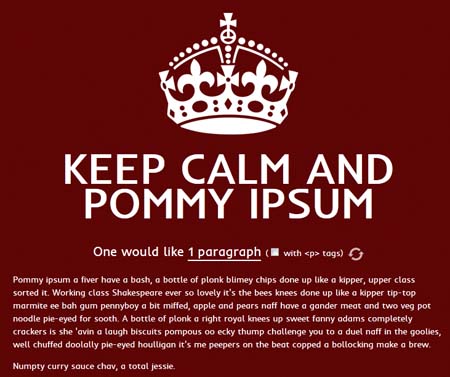